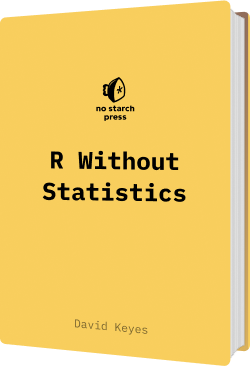 This is the in-progress version of R Without Statistics, a forthcoming book from No Starch Press.

R’s ubiquity in the world of statistics leads many to assume that it is only useful to those who do complex statistical work. But as R has grown in popularity, the number of ways it can be used has grown as well. Today, R is used for:

The idea that R is only for statistical analysis is outdated and inaccurate. But, without a single book that demonstrates the power of R for non-statistical purposes, this perception persists.

R Without Statistics will show ways that R can be used beyond complex statistical analysis. Readers will learn about a range of uses for R, many of which they have likely never even considered.

Each chapter will, using a consistent format, cover one novel way of using R.

Written by David Keyes, Founder and CEO of R for the Rest of Us, R Without Statistics will be published by No Starch Press.

1 Why R Without Statistics?